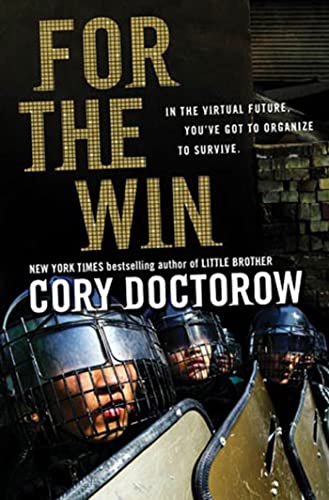 Doctorow uses video games to get teenage readers to think more about globalization, economics, and fair labor practices in this expansive but ponderous story. Set, like his earlier , in a near-future world, it centers on attempts to unionize teenagers who work within massively multiplayer online role-playing games (MMORPGs) as gold farmers, employed to raise game gold and find magic items to be resold, or as Turks, who help police the virtual environments. Employed for minimal wages under horrible working conditions—sometimes in near slavery—these children, led by a global group of fierce and talented gamers, band together, subverting the MMORPGs to take on their corrupt local bosses and the corporations that own the games. As usual, Doctorow writes with authority and a knack for authentic details and lexicon, moving between impoverished villages in China and India and inventive video game worlds. But the story founders under the volume of information he's trying to share—the action is interrupted by lectures on economic principles, sometimes disguised as conversations—and an unwieldy cast of characters. It's undeniably smart and timely, but would have benefited from tighter editing. Ages 12–up.