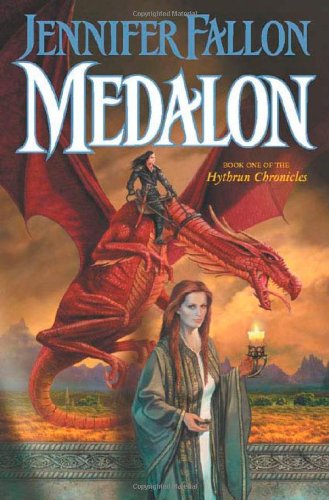 Medalon is a country ringed by hostile, heathen nations and beset by internal politics filled with blackmail, backbiting and single-minded power-mongering—at least that's how it seems to R'shiel Tenragen, the wayward 18-year-old daughter of the First Sister of the Blade and the appealing heroine of Australian author Fallon's sparkling high fantasy debut. In Medalon, the Sisterhood has systematically stamped out any trace of religion and the heathenish belief in the gods and in the Harshini, mythical, magical beings who some think bridge the gap between gods and men. But suppose that the Harshini really did exist and that they are living still. Suppose that the gods have given the Harshini a task so big and so difficult that they nearly can't encompass it. Worse yet, suppose that R'shiel, a postulant of the Sisterhood, becomes part of this Herculean task. Fallon ponders all these possibilities and more in this satisfying melodrama, stocked with well-developed characters with clear motivations that carry them through a series of byzantine plots and counterplots, a mini-rebellion and even face-to-face contact with a variety of gods.