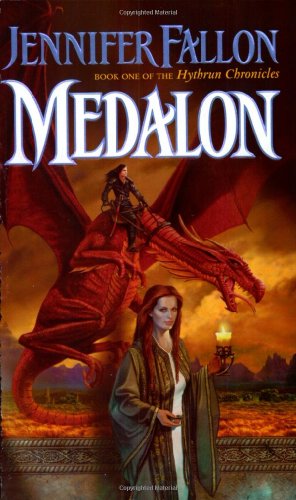 Convoluted intrigues, rivalries and romance provide an entertaining tangle in the second book in Australian fantasy author Fallon's Hythrun Chronicles (after The rebellion led by Tarja Tenragen and his half-sister R'shiel against their mother, the ruler of Medalon, has succeeded, but not without costs. Medalon is threatened by neighboring Karien and internally torn by those still loyal to the fallen First Sister of the Blade. Sorely wounded R'shiel (half-human and half-demon) lies in the hands of the legendary Harshini healers—but the Harshini have their own agenda, and the race's prohibition against violence doesn't prevent them from manipulating others to do their killing. While a recovering R'shiel is groomed to destroy the fundamentalist Kariens' god Xaphista, Tarja allies with dashing Damin Wolfblade, Warlord of Krakandar, and settles into Treason Keep to prepare for a Karien attack. Meanwhile, Hablet of Fardohnya sends his strong-willed daughter Adrina to forge an alliance with Karien by wedding crown prince Cratyn. Although the fates of Tarja and R'shiel form the series heart, Damin and Adrina are the heart of this exciting story, accompanied by a large cast of compelling characters. While new readers may have trouble getting up to speed initially, their patience will be well rewarded; fans arriving straight from book one can dive right in.