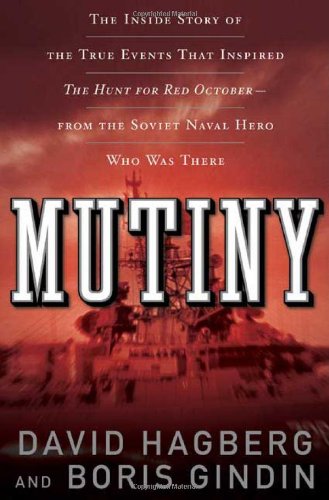 Mutiny: The True Events That Inspired 'The Hunt for Red October’

Prolific thriller writer Hagberg ( ) and former Soviet naval officer Gindin recount the 1975 mutiny aboard the FFG , a Russian antisubmarine warfare ship, which inspired Tom Clancy’s international bestseller. Gindin was a senior lieutenant and chief engineer on the when it was seized by Capt. Third Rank Valery Sablin. An idealist who “actually believes the Party line,” Sablin intended to sail the ship into the Baltic Sea and broadcast an appeal to the Russian people to overthrow the corrupt Kremlin leadership. He secured the crew’s support by promising them “an early out from the navy,” and arrested the captain and the ship’s officers, including Gindin, who refused to cooperate. Upon hearing the news, Kremlin leader Leonid Brezhnev ordered his navy to “find that ship and sink it.” Under attack, the mutiny fizzled and the ship and crew were spared, but the personal repercussions were severe. Another nonfiction account of the mutiny, , was published in 2005, but the eyewitness testimony of coauthor Gindin justifies a retelling. Unfortunately, tutorials on subjects as diverse as historical mutinies and Soviet executions slow the narrative, and the documentation is bare bones.