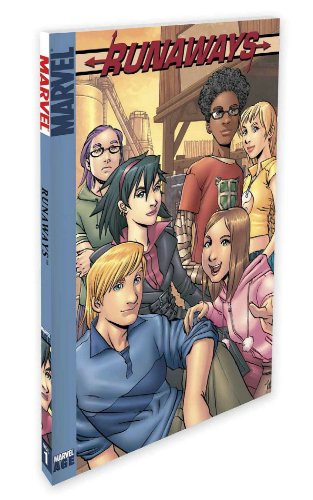 This unusually clever, fun teen comic is based on the novel premise that parents don't just seem evil, they actually evil supervillains. Or so some kids find out one night while eavesdropping on a dastardly meeting they take to be a cocktail party. Although the children are each a "type" right out of sitcom land—the goth girl, the brain, the jock, the dreamboat, the shy one—they're also fairly empathetic characters. Vaughan's closely observed dialogue lends them authenticity and pathos as they go through the disturbing realization that their parents aren't just jerks but actually mass-murderers. The plot builds from this initial discovery, as the kids band together, discover they, too, have superhuman powers and engage their parents in good, old-fashioned superhuman fisticuffs. The group goes on the run and discovers their parents have all of Los Angeles in their pockets—it's enough to make a teenager feel more alienated than ever. Alphona's dynamic, manga-influenced artwork agreeably complements Vaughan's crisp writing. They tell the story with clarity, a dollop of drama and just enough pizzazz to hook video game–obsessed readers. Packaged in a manga-size paperback, Marvel's attempt to tap both the manga and the young adult market nicely succeeds.