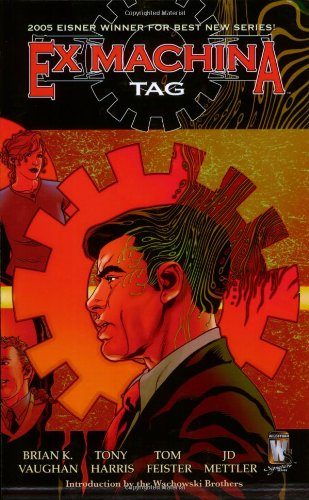 What would you do if a mysterious explosion left you with the ability to control machines? Become mayor of New York, of course. Mitchell Hundred gave up crimefighting years ago, and now fights evil with a pen and a mayoral seal. His mysterious power still comes in handy, though, especially when he can make the paparazzis' cameras jam or the neighbor's air conditioner stop rattling. But ever since his attempt to help fend off the September 11th attacks forced him to reveal his secret identity, things have gotten terribly complicated for Hundred. In this second volume we see him struggling with a political firestorm ignited by his open support of gay marriage at the same time that a mysterious presence is terrorizing New York's subways, leaving behind the horribly mutilated bodies of dogs and humans. Beside each gruesome discovery is a glyph linked to the explosion that gave Hundred his power. Vaughan ( ) and Harris ( series) have a created a compelling and completely original hero in Mitch Hundred. Ex Machina is half , half and 100% genius. The dialogue sparkles, the art beautifully conveys both Vaughan's horror and his humor, and the plot twists will have readers on the edge of their seats. For any fan of contemporary comics, is the series to read.