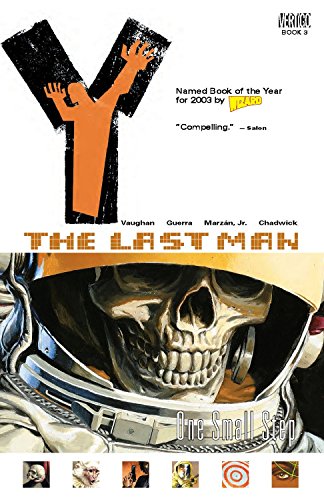 In this addictive follow-up to the brilliantly imagined , we're still in the near future and Yorick Brown and his monkey sidekick, Ampersand, are still the last two males on Earth. It's been some months since the mysterious plague that wiped out all male creatures. Since then, women have been picking up the pieces. A mysterious government agency, the Culper Ring, is trying to get Yorick across the country for scientific study without being discovered, which isn't as easy as it sounds, but at least the growing drag king subculture makes it possible for people who look like men to walk around without exciting too much comment. Meanwhile, an Israeli strike team is trying to capture Yorick for its own uses, and the U.S. president is colluding with them. Most suspenseful of all, a space station carrying two surviving astronauts is about to crash down in a Kansas cornfield. The stakes are high, and Vaughan masterfully interweaves story lines: the astronauts' survival, the military operations, an enemy spy, the valiant scientists and an unexpected travelling drama troupe that offends an entire town when it puts on a play in which the world is saved by a lone surviving man. Meanwhile, is Yorick falling in love with his bodyguard? Guerra knows just what the story needs, backing up Vaughan's tale with killer artwork and a smorgasbord of female heroines who look terrific without the least suggestion of cheesecake. This book is complete and utter comic gold.