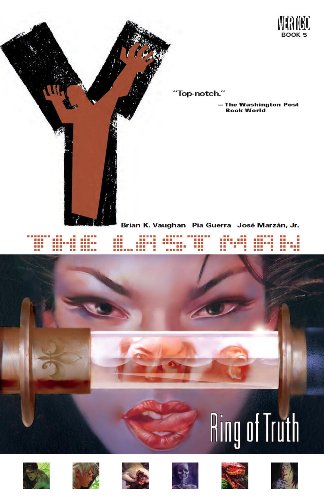 An adolescent male daydream becomes a nightmare in this convoluted SF thriller. Having somehow survived a plague that instantly killed all the other men on Earth, Yorick Brown finds himself the object of universal desire. Unfortunately, some of the women frantically chasing him are members of a lesbian Amazon cult that wants revenge for centuries of masculine oppression. Others are more interested in exploiting Yorick's unique immunity than in having sex with him. In this collection of eight issues of the monthly comic, Yorick bounces from one group to another as he also tries to discover why he was spared and whether there is any way to make the world safe for other men. Meanwhile, women debate whether the world is really a better place without men—although the story so far shows that women are fully capable of taking over male roles in violence, conceit and general obtuseness. Guerra and Marzan's sedate art makes the extreme situations look convincing, and Vaughn's script keeps the interplay of different factions moving briskly even if readers can't be sure what each represents. Despite its outlandish premise, this works much better than it has any right to.