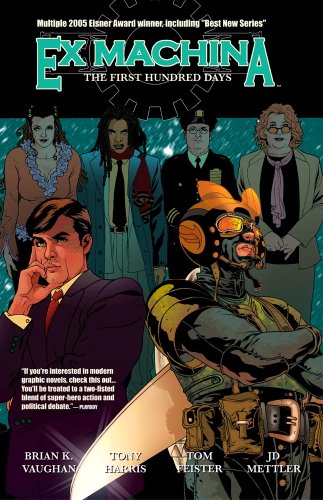 Set somewhere between and an alternative future, this tale asks the question: What if the mayor of New York was a superhero? Vaughan ( ) and Harris ( ) answer with intelligence and dash. In classic superhero origin, Mitchell Hundred is just another civil engineer until an encounter with a glowing light under the Brooklyn Bridge gives him the power to talk to machines. Fast forward three years: after a famed stint as a superhero, Hundred has just been elected mayor of New York and must deal with not only the colorful cast of characters that make up his staff but also a host of crises: a PR disaster set off by an exhibit at the Brooklyn Museum; a crippling blizzard; and, most worryingly, a serial killer who's bumping off the city's snow plow drivers. Vaughan cleverly adapts real news stories—New York mayoral politics, the art scandal—and plausibly fits them into a world where superheroes exist, but are forbidden by the NSA to talk about their powers, while adding surprising twists and turns. Harris's gritty, charismatic characters give the story further appeal. This vastly entertaining first collection should have readers eager to read future volumes.