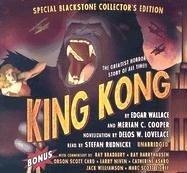 Rudnicki provides his melodious baritone to this novelization of the classic movie, , which is pretty much the 1933 screenplay, scene for scene. Rudnicki presents the story in a straightforward, no-nonsense manner. He keeps his characterizations diverse but restrained, even when dealing with the natives on Skull Island and their 1930s fabricated language. He maintains a solid, respectful tone for the somewhat dated and melodramatic prose and provides a fine, laid-back performance. Even more enjoyable are the commentaries found on disc five. Of the commentators presenting their thoughts on the film, Ray Bradbury and Ray Harryhausen give the most reverent testimonies, crediting their viewing of the original as a life-changing event. In contrast, Orson Scott Card states that he just doesn't get all the hubbub. For him, the film, with its primitive-by-today's-standards animation, is "a complete bust." With curmudgeonly charm, the most humorous commentary goes to Harlan Ellison, who praises the original 1933 film and vilifies those who would seek to remake it. The other commentators (including Larry Niven, Catherine Asaro, Jack Williamson, Marc Scott Zicree) offer various insights to , but most tend to be fond tributes to this ultimate tale of the beast and his beauty.