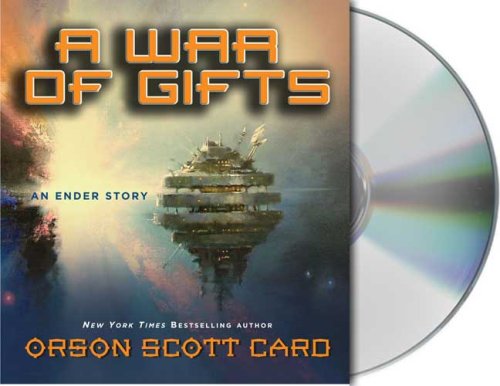 A War of Gifts

Adding to the ever-growing Enderverse, Card provides listeners with an amusing and sincere tale about religious observance just in time for the holidays. Like all Battle School students, Zeck has been torn from his family and religion to train in a school in outer space. Passively resisting his environment, Zeck must find a way to reconcile his beliefs with his actions and learn new things about himself that will challenge the life he knew. With Brick's lighter tone complementing Rudnicki's deep resonating voice, the two make an excellent pair as narrators. Often, their parts are split according to point of view, so that Brick narrates aspects of the story from the vantage point of Zeck and the other students while Rudniki embodies the adults, especially the militaristic leaders at the Battle School. Mostly, this shifting back and forth is done by sections of the book, and not in characters exchanging dialogue. However, very abruptly at one point in the story, the director decided to have Brick and Rudnicki exchange dialogue. If this were the standard throughout, it may well have worked, but since it happened only once and in mid-discussion between two characters, it feels out of place.