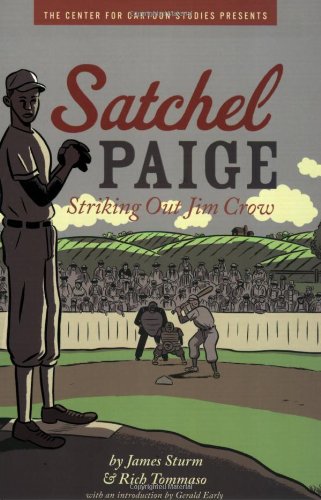 Delivering far more than a conventional biography or baseball book, this graphic novel reveals the sport as an agent of hope in the Jim Crow South. Sturm (cofounder and director of the Center for Cartoon Studies, which partnered with Hyperion for this title) and Tommaso create a fictional African-American sharecropper who turns to Negro League baseball to support his family (“I’ll be makin’ more money than her daddy and my daddy put together. Ain’t braggin’ if it’s true”). The narrator hits a pitch off of Satchel Paige, but his career is cut short by injury and he returns to sharecropping. When he sends his son to school rather than have him work the fields, two white land-owning brothers mercilessly beat the boy; the book’s only full-spread art eschews the traditional square and rectangular panels used everywhere else and, devastatingly, shows father and son the next day, laboring in an endless field of cotton. The story culminates with Paige’s team coming to play against the all-white hometown favorites: the final score is less important than the chance to see Paige make quick work of the opposing batters. The narrative and duotone art are largely understated, with stark exceptions: among them, a lynching victim hanging from a tree and an epithet, directed at Paige, which roars across the infield. By emphasizing Paige’s influence and mythos rather than focusing on details about his life or career, Sturm and Tommaso offer a powerful and unique testimony to his legacy. Ages 10-up.