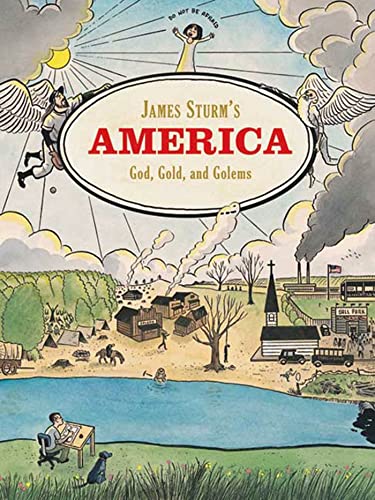 Three of Sturm's previously released graphic novels are gathered to create a Howard Zinn–like look at lesser-known episodes of America's past. "The Revival" is a short, sharp piece dramatizing the massive 1801 religious revival meeting in Cane Ridge, Ky. (the country's biggest ever), with the story of a traveling couple who arrive at the meeting with fire in their eyes and a dark secret pushing them on. In "Hundreds of Feet Below Daylight," successive waves of greed, racism and blind folly swamp a Western mining town in the late 19th century. Because the allegory for the evils of Western expansion is so blatantly rendered, it's by far the weakest segment. The strongest is the last and longest, "The Golem's Mighty Swing," which adds a welcome dose of lyricism. Building on scraps of early baseball history, the Negro Leagues and Jewish mysticism, Sturm weaves a parable on racism and spectacle around a barnstorming, supposedly all-Jewish team in the 1920s called the Stars of David. The more the players parody themselves as mystical Hebrews, the more they earn. Sturm's art changes with the time period, moving from the dark gothic style of "The Revival" to the last story's clean and airy nostalgia.