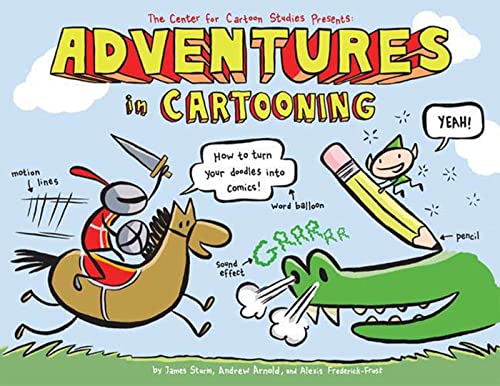 Created by the Center for Cartoon Studies' director and two of his former students, this how-to-make-comics book for young readers takes a couple of unusual tacks. For one thing, it skips the usual rudiments of how to draw in favor of explaining the formal characteristics of comics: panels, balloons, lettering and so on. For another, it doubles as a story—about a knight on a quest for a bubblegum–chewing dragon, and the magic elf who teaches the knight all about the joy of cartooning. It's a cute premise, and the art's simple, bold brushstrokes and flat colors are zippy and fun. Sturm and company even sneak in a few comics in-jokes (when several characters fall into water, the elf exclaims “I guess this would be called a SPLASH panel!”). Unfortunately, the plot and the tutorial material repeatedly stumble over each other: the goofy twists in the story occasionally have a bit of instruction shoehorned in, but more often don't serve any educational purpose—or simply seem like the result of stream-of-consciousness jam cartooning. And kids looking for cartooning guidance may be frustrated to find that the book takes its readers' ability to draw expressively for granted.