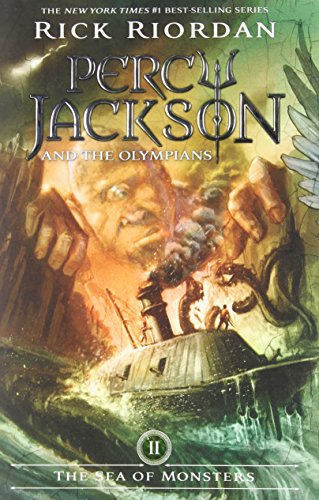 The Sea of Monsters

In a feat worthy of his heroic subjects, Riordan crafts a sequel stronger than his compelling debut in this second adventure in the Percy Jackson and the Olympians series. After a group of Laistrygonians (giant cannibals) infiltrate the dodgeball game at Percy's alternative Manhattan school, and his friend Annabeth (a daughter of Athena, introduced in the first book) comes to the rescue, the two take the homeless scholarship student Tyson with them to Camp Half-Blood, where trouble is brewing. Percy soon realizes that Tyson is a Cyclops (meaning they're half-brothers and possibly enemies—both sons of Poseidon) and learns that someone poisoned the sacred Thalia's tree, which protects the "magic borders" of the demigod camp. Riordan catches readers up seamlessly on this world in which gods still reign; he builds on existing subplots and rivalries, and introduces harrowing new challenges as Percy and Annabeth set off across the Sea of Monsters on a quest to find the Golden Fleece, which will heal Thalia's tree. Percy's relationship with Tyson and their battle against the Cyclops guarding the Fleece (Polyphemus) brings up probing questions about shame, family and loyalty. With humor, intelligence and expert pacing, the author uses this tale of believable teens and their high-stakes struggle to bring the mythical lore up to date (e.g., Hermes, appropriately, invented the Internet). A cliffhanger imparts new meaning to the prophesy (mentioned in the first book) and leaves no question that Percy's high-stakes battle for Western Civilization will continue to surprise even himself. Ages 10-up.