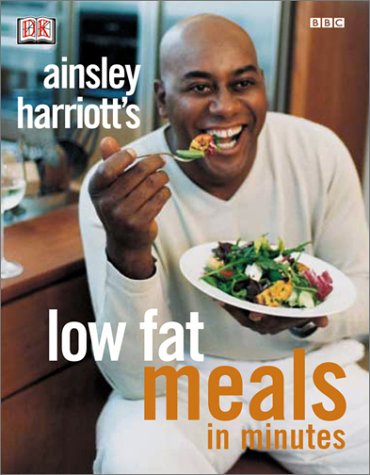 For those who still believe that low-fat diets trump the low-carb kind, the London chef and TV personality () offers 80 easily prepared, generally appealing dishes. Many are accented by such ingredients as cilantro, mint, hot peppers and harissa, and most are accompanied by rice, potatoes, tortillas or noodles. Oil is often sprayed instead of poured on, and occasionally prepared food is a component, as in SOS Chicken Curry with Rice Pilaf, which includes reduced-fat, pre-cooked chicken tikka breasts—and just two teaspoons of vegetable oil. Jamaican Jerk Chicken contains no extra fat, but plenty of heat from habañero or Scotch bonnet peppers. Among the especially enticing fare are Jalapeño Tiger-Shrimp Ginger Skewers, in which a shrimp is inserted into each pepper before grilling, and Scalloped Potato Shepherd's Pie. Two-thirds of a cup of strong black coffee perks up Café Chili Beef Tacos, which boast but a teaspoon of oil. Creative desserts include the intriguing Star-Anise-Scented Strawberries and Trim Tiramisu with its secret of the low-fat soft cheese known as Quark. Livelier than a good many low-fat collections, this book offers surprisingly big flavors.