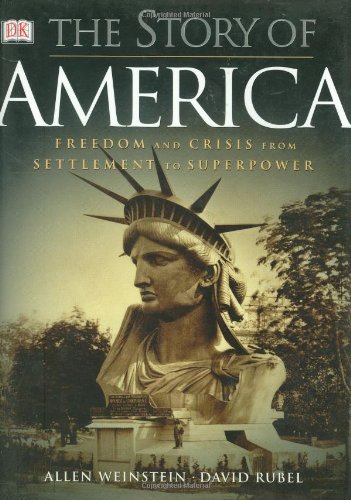 THE STORY OF AMERICA: Freedom and Crisis from Settlement to Superpower

An alternative title for this might be "The Treasury of American History" as it's an anthology of our nation's favorite stories: Lewis and Clark's expedition, Nat Turner' s revolt, Custer's last stand, Lindbergh's trans-Atlantic flight, and Nixon' s Watergate scandal. If the stories are familiar, the format—at least for the pre-Internet generation—is new. Adapting Web site dynamics to the printed page, the designers enhance the text with sidebars and photographic collages. The stories themselves mimic the skip-and-jump of Web narratives. Nat Turner's revolt opens with slaves plotting an uprising, then steps back to discuss the origins of slavery in the South before returning to the failed revolt and its aftermath. Readers with an above-average attention span may find the chronological shifts jolting and the cluttered pages distracting; but the book never becomes tiresome. Taken together, the stories advance two themes. Weinstein, who heads the Center for Democracy, portrays our nation's history as the crisis-ridden spread of freedom through American society and outward to rest of the world. At the same time, the authors emphasize the key role of individuals; the vivid profiles of Great Men (and Women), contributed by today's leading historians (such as Joseph Ellis and Geoffrey Ward), reinforce this message. With its lively storytelling and thorough coverage of our nation's first five centuries, this truly is a treasury. 2,000 illus.

Freedom: A History of US