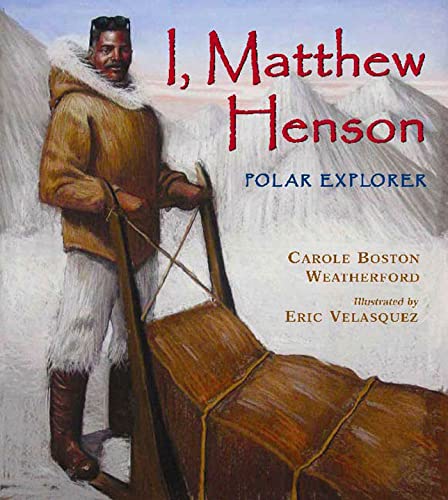 Tough-minded and poetic, this biographical sketch draws much of its power from what it leaves unsaid, obliging readers to align themselves closely with the narrator. The speaker is Matthew Henson, who joined Robert Peary in planting the flag on the North Pole in 1909; the words Weatherford assign him testify to a lifetime spent in resolute pursuit of his ambitions. “I did not start as cabin boy, climb the ranks to able-bodied seaman... and learn trades and foreign tongues to be shunned by white crews who thought blacks were not seaworthy,” he states. “My dreams had sails.” Setting forth a dramatic list of what Henson “did not” do, the story points to extraordinary reserves of courage and perseverance: Henson sails with Peary, “again and again,” through the frozen seas, starves, returns to the U.S. and marries, and tries once more to reach the North Pole. Where the text adopts Henson's perspective, Velasquez (previously paired with the author for ) generally views Henson at an ennobling distance, envisioning him communicating with Eskimos (alone of Peary's men, he learned Inuit) or shielding his face, temporarily a railroad porter in the segregated South. His pastels are especially well suited to the polar scenes, where they suggest both the cold hard surfaces of snow and ice and the frozen colors of the skies. An endnote amplifies Henson's life and accomplishments. Ages 6-11.