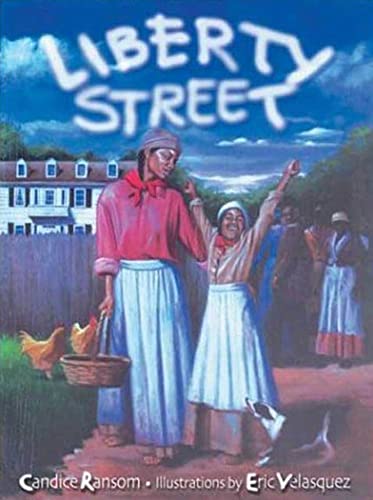 It is "Sunday! Sweet Sunday!" in pre–Civil War Fredericksburg, Va., and Kezia and her mother head down Liberty Street, the road traveled by captives who are "at liberty" for the afternoon. "White folks own the streets like they own us," says narrator Kezia. "But this path is ours, worn by the pounding of many bare feet." This potent symbol illuminates Ransom's ( ) story, which capably captures the back-breaking drudgery ("We work for [Missus Grace], candlelight to candlelight, day in and day out") and injustices ("It's against the law for Miss Eulalie to teach and for us to learn.... If we are caught, we could get thirty-nine lashes") of that time. Despite this rich premise, the narrative lacks dramatic impact and the characters never fully come to life. Instead, Velasquez's ( ) fine realistic illustrations deliver much-needed emotional resonance, especially a wrenching flashback in which Kezia's father is sold away. His visual devices also add poignancy: he frames his illustrations and places the characters directly in front, and often groups several scenes on a page. This layered illustrative approach, especially in the scenes when Kezia escapes to freedom, adds a you-are-there immediacy to a story that will likely interest young historians, but may not grab them by the heartstrings. Ages 6-9.