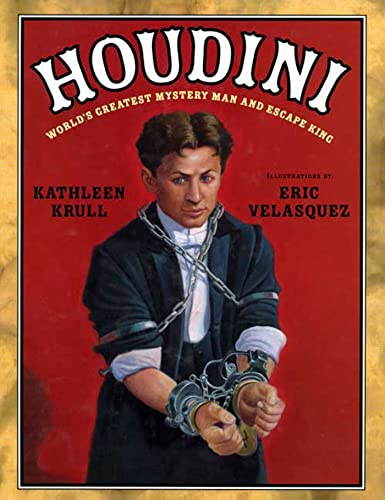 Packed with period flair and lush oil illustrations, this picture-book biography spotlights perhaps the greatest name in magic. Exploring the life of a man who, even as a child, reveled in the attention of audiences, Krull ( ) and Velasquez ( ) also shine when depicting some of the tricks that garnered him so much fame. Houdini, born Erik Weiss in Budapest in 1874, spent his childhood in Appleton, Wisc., where his acrobatic feats earned him the nickname "The Prince of the Air." He ran away from home at age 12 to lighten his family's financial burden, later reuniting with them in New York City. As his magic career skyrocketed, he changed his name to Harry Houdini, took another performer, Bess Rahner, as his wife and continually pushed the envelope in the scope of his tricks. Interspersed with this historical journey are spreads that depict several of his more famous feats—such as "The Milk Can Escape" and "The Water Torture Cell"—complete with a mustachioed Master of Ceremonies. The text in these scenes takes its cue from the hyperbolic advertisements of the era: "Underwater and upside down he hangs. He cannot breathe. A wrong move will break an ankle." Velasquez's oil illustrations are especially strong in these scenes that freeze-frame the feats of magic; they possess an almost photographic quality. A fine introduction to a fascinating, enigmatic figure. Ages 6-10.