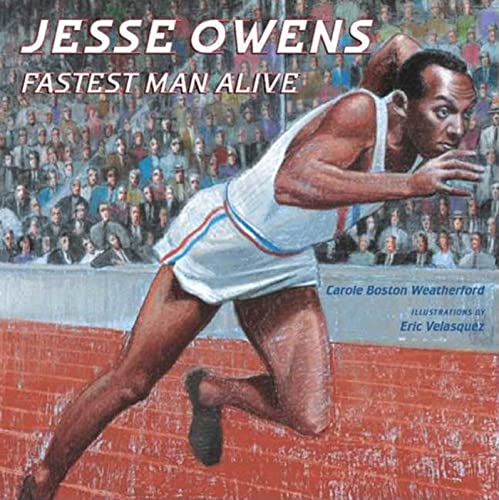 Weatherford ( ) addresses her poetic tribute to Jesse Owens's remarkable performance at the 1936 Berlin Olympics to the athlete himself: "Go from cotton fields to city sidewalks,/ from sickly child to keen competitor,/ from second-class citizen to first-place finish./ Go, Jesse, go. Trounce Jim Crow./ Run as fast as your feet can fly,/ as far as your dreams will reach." This allows the author to weave in subtle references and to make readers feel like privileged insiders (e.g., "find new track shoes/ to replace the ones you lost in New York"). The narrative follows Owens to Berlin, where Nazi flags line the streets, and beyond the city, to sobering images that Owens, and spectators of the Games, were "not meant to see"—the concentration camps. Hitler's presence casts a dark shadow over Owens's brilliance on the track ("Hitler does not want your kind here,/ does not believe you belong./ Prove him wrong"). After describing the fourth of the athlete's gold medal–clinching events, Weatherford asks, "Who'd have thought/ that a sharecropper's son,/ the grandson of slaves,/ would crush Hitler's pride?" In the tale's final victorious note, Owens rides "like a prince" in the lead car of a Manhattan ticker-tape parade honoring his team. An endnote provides facts about Owens's life before and after his Olympic feats. Sometimes calling to mind old-time photographs, Velasquez's ( , reviewed above) pleasingly grainy pastels easily convey the movement and speed, determination and triumph at the core of Owens's uplifting story. Ages 6-11.