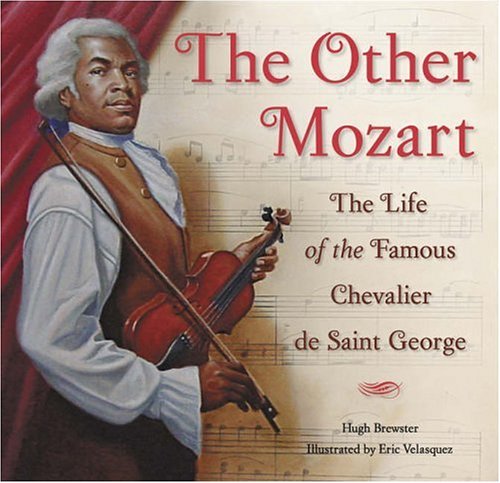 The Other Mozart: The Life of the Famous Chevalier de Saint-George

Brewster ( ) immerses readers in 18th-century France in this picture-book biography of little-known musician Joseph Bologne Saint-George (1745–1799). Famous for more than just his music, the man's drive and talents spurred him to greatness in other areas, such as fencing and military leadership. Born to an enslaved West Indian mother and a French aristocrat, Bologne spent his early childhood in Guadalupe and at age eight moved to Paris where his father, Georges de Bologne-Saint-George, granted him and his mother freedom. His father gave Joseph the title "the Chevalier de Saint-George," and later, "People even called Joseph 'le Mozart noir'—the black Mozart," for his musical genius. Valesquez's ( ) elegant paintings, framed in regal hues, depict the chevalier (who was a favorite musician of Marie Antoinette) at his many pursuits. One portrait of a confident, strong Joseph in a fencing stance, backed by an ominous gray sky, appears to be symbolic of the book's recurring theme of his ambition set against a backdrop of prejudice. Art reproductions and photos show places, people and artifacts from this era, and sidebars convey the history of some of these (e.g., a timeline of Marie Antoinette and the French Revolution). These diversions can feel like interruptions to Joseph's story, but the end result is a fascinating story that plucks a remarkable man from obscurity. Ages 5-10.