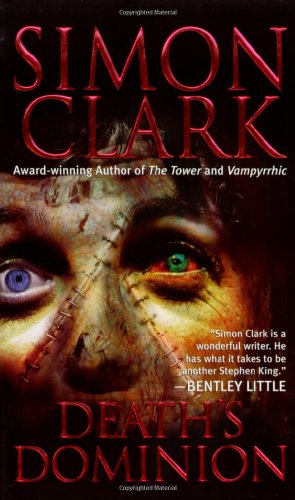 In the latest blood-soaked genre-tweeker from British novelist Clark ( ), Mary Shelley's gets replayed inside-out, in a modern world where the dead are routinely brought back to life—larger, stronger and healthier, but intrinsically bound by two laws taken from Asimov: none of their kind—referred to as "monster"—may harm a human, or let a human come to harm due to their inaction. As the story begins, humans have called open season on monsters for reasons unknown. Escaping from a government raid, a small band of monsters stumble on a recently reborn man named Dominion, a confused hulk with human blood on his hands. The refugees quickly fall in line behind Dominion, appalled at the violence he's able and willing to commit against humans but powerless without him; indeed, apart from the bloodthirsty humans, the villains are those monsters ready to surrender to their "betters." Soon, the party of monsters have invaded a run-down village and taken over their cliffside castle, in thrall to a sketchy plan locked in Dominion's uncooperative brain. There's a political backstory that doesn't quite adhere, making quasiallegorical parallels to the Holocaust and the Israel-Palestine conflict less resonant. That aside, all the monster-burning, skull-crushing, village-razing, castle-raiding fun—along with a splash of sex and several buckets of gore—make for a satisfying son of Frankenstein.