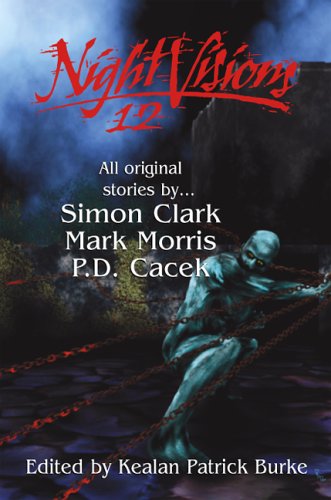 The latest installment in the venerable Night Visions series, edited by relative newcomer Burke ( ), matches the talent included in previous volumes with eight horror stories from three British writers. Simon Clark honors past masters of the genre with his three pieces; the best of which—"Frankenstein, Victor"—reimagines Mary Shelley's classic and exemplifies Clark's political commentary, vivid imagery and incisive characterization. Mark Morris's contributions stand out in the volume, particularly "The Story of April and Her Colours," narrated with eerie sweetness by the autistic protagonist, and the nightmarish "What Nature Abhors," about one man's descent into a very personal hell. P.D. Cacek rounds out this excellent anthology with "Forced Perspective," a novella about a psychiatrist's romances with his patient's multiple personalities, and "Campfire Story," about a boy who'd do almost anything for his best friend.