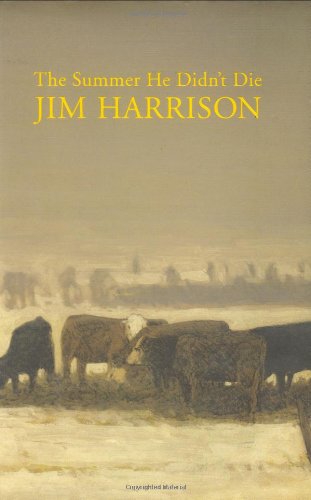 The Summer He Didn't Die

Three very different and challenging approaches to the novella form Harrison's latest. The title story laconically narrates the struggles of a multiracial, Indian-identified Northern Michigan wood pulp cutter named Brown Dog, a single father with an imprisoned, alcoholic wife. When the state dictates mandatory schooling for his disabled 7-year-old daughter, who suffers from the effects of fetal alcohol syndrome, "B.D." must decide whether to flee with her to Canada. "Republican Wives" presents after-the-affair disquisitions from three women who were the lovers of local university-based poet Daryl, whom one of the women, Martha, has tried to kill with an overdose of Elavil. The final novella, a meandering, partially autobiographical character study called "Tracking," thoroughly inspects the career's worth of baggage that has resulted from life as a white male writer operating in nonmetropolitan middle America. Harrison's command of the novella form is as impressive as the range of his voices, with his prose moving from the interiorized Faulknerian third-person of the title story to the run-on, staccato first-person of the first, and best, of the "Republican Wives." Following on the novel , this set of short fictions shifts pitch-perfect perspectives effortlessly, with a lightness that belies its depth. .