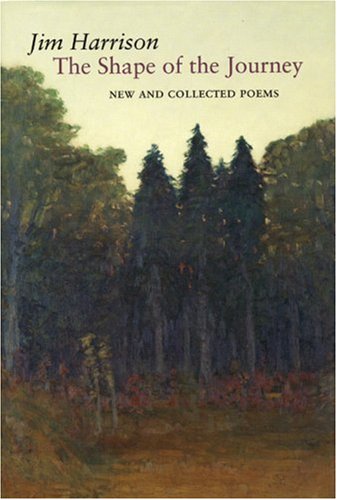 The Shape of the Journey: New & Collected Poems

Known for his fiction (Legends of the Fall; The Road Home; Wolf) and for his essays (Just Before Dark), Harrison has also been a prolific, ambitious poet. This expansive ""new & collected"" volume restores to print all his verse, from the lyrics and protest-poems of Plainsong (1965), through the effusive Letters to Yesenin (1973), the Zen-inspired After Ikkyu (1996), and the new miscellany of nature-verse and prose-poems Harrison calls ""Geo-Bestiary."" Harrison's works share a self-confident ease, a desire for simple lyricism and an unbuttoned, slouching, at-home feel; he conceives of poems as hikes, rambles, tours of his mind and his lands: ""walking to Savage's Lake where I ate my bread/ and cheese, drank cool lake water and slept for a while."" (The landscapes are often those of Northern Michigan, where Harrison lives.) In a sheaf of ghazals from 1971, Harrison's lyricism turns brilliantly campy, with distichs leaping and leaping like cats: ""Yes yes yes it was the year of the tall ships/ and the sea owned more and larger fish."" Later poems, reminiscent by turns of Gary Snyder, Robert Bly and Raymond Carver, specialize in diaristic noticing--of trees, of drinking, of sex (""She offers a flex of butt, belly button, breasts"")--or else in quotable wisdom: ""Even our hearts don't beat/ the way we want them to."" But even these retain saving moments of flannel-clad, pine-forest camp: ""I have to kill the rooster tomorrow. He's being an asshole,/ having seriously wounded one of our two hens with his insistent banging."" (Nov.)
close
Details