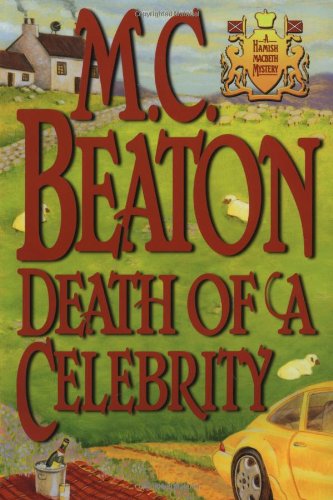 DEATH OF A CELEBRITY

For readers who prefer their whodunits more cute than action-packed, Beaton delivers the 17th installment in his constable Hamish Macbeth series (after 2001's ). Stodgy "town bobby" Hamish protects and serves the quaint Scottish highlands village of Lochdubh—which sees a lot of crime for a one-horse town—and outwits the Strathbane big-city police in this story of multiple murders and TV ratings. Seeking better numbers and national notice, the local station hires the glamorous and catty Crystal French, who presents some very nasty programs about what goes on in a highland village. Needless to say, this doesn't please the local folk, and soon enough, Crystal is found murdered. Suspicion vacillates between the townspeople and the television people (including the woman whose job Crystal had taken), who have quite a few secrets of their own. Hamish sniffs around and formulates theories ("It's because I'm a village constable that I solved your murders for you. I know people better than I know police procedure"), but just when he thinks he's getting somewhere, there's another murder. Things become increasingly complicated, including Hamish's love life: local reporter Elspeth Grant is sweet on Hamish, even if he's too dense to realize it. With teasing epigrams at the start of each chapter, a good dose of Britishisms and light suspense that carries through details both quotidian (Hamish's traffic patrol and his dog Lugs) and faintly exotic (psychics and gypsies), this book is one to be enjoyed with a nice cup of tea and a biscuit.

Agatha Raisin and the Love from Hell