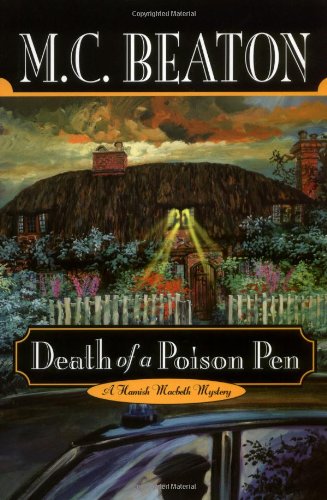 DEATH OF A POISON PEN

British author Beaton's Hamish Macbeth series remains reliable on several fronts: her Scots police officer Hamish will solve the crimes in an appropriately heroic and entertaining way; he will be as clueless as ever in regard to the women who set their caps for him; and he will continue to resist both promotion out of his remote village of Lochdubh and restrictions imposed by his nominal superiors. In this, the 20th entry (after 2003's ), a series of poisoned pen letters have the townspeople of the nearby town of Braikie on edge, and rumor and suspicion threaten to lead to violence. Hamish faces danger of another sort, when Jenny Ogilvie, a London friend of Hamish's old flame Priscilla Halburton-Smythe, decides that romancing Hamish would be a delicious way to bother Priscilla. The author adeptly limns her village characters' foibles and frailties, and the poisoned pen letters set them off in high relief. Set pieces abound, from detective Jimmy Anderson's cadging of drinks, to Detective Chief Inspector Blair's ineptness and animosity, to the endless misunderstandings that separate Hamish and reporter Elspeth Grant. While the tunes Beaton's characters dance to may be familiar, they vary just enough to keep fans turning the pages.

Agatha Raisin and the Haunted House