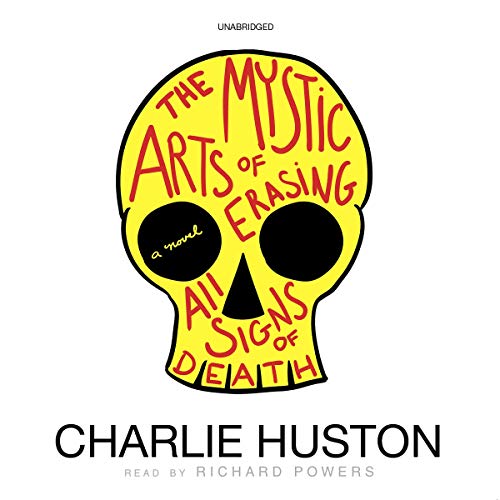 The Mystic Arts of Erasing All Signs of Death

Huston's darkly comic slice of Southern California noir is filled with distinctive characters that leap from the page and, thanks to Paul Michael Garcia's remarkable versatility, speak in equally arresting voices. Chief among them is Web Goodhue, the novel's narrator, a slacker forced by circumstance into temp work with a crew that mops up messy postmortem residue. Just as Huston makes the outwardly obnoxious and brutally snarky protagonist sympathetic, Garcia layers self-doubt, sensitivity and intelligence beneath the arrogance and an overriding humanity that Web attempts to mask with his misanthropic (often very funny) remarks. The other characters are equally well matched vocally: Web's father speaks with the boozy rasp of a self-loathing alcoholic; Po Sin, the massive boss of the Clean Team, has a deep and rumbling delivery; and femme fatale Solidad tries to hide her naïveté behind hard-boiled banter. Throw in a gallery of motor mouth crazies, flat-voiced killers and Web's amazingly tolerant best friend Chev, and you have a thrilling and smartly enacted audio package.