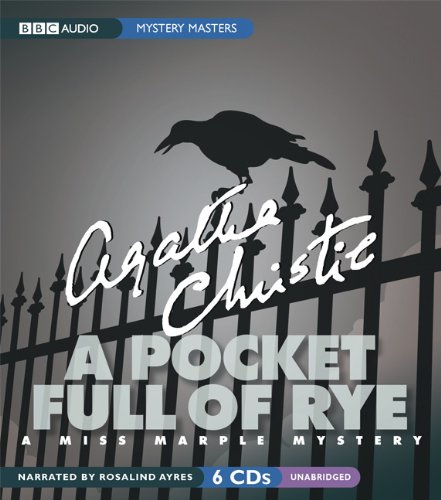 A Pocket Full of Rye

It hardly seems possible for anyone to best Hugh Fraser’s savvy audio performance of Christie’s Hickory Dickory Dock, but Rosalind Ayres produces an amazing range of voices and accents to create her own one-woman full-cast audio book. After the death by poisoning of wealthy Rex Fortescue, others in the household are murdered in ways that mimic a Mother Goose rhyme. Ayres’s Miss Marple is well-mannered, polite and even diffident. Ayres seems to be mocking stereotypes of British accents. Percival, the elder son, is stuffy and nasally clogged. Lancelot, the younger son, is ironic and cavalier. Ayres can slip effortlessly from one accent to another, as when the lofty voice of Rex’s secretary collapses into the low-class accent of an East Ender after she discovers her boss’s body. The greatest mystery in this 1953 novel is why any mid-century father would name his children Lancelot and Percival. Though the story lacks action and enough Jane Marple for Ayres to develop, her performance is a delightful romp for any Christie fan. (Feb.)