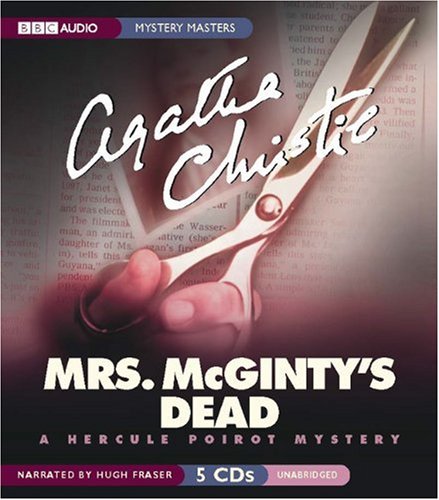 Who could be better reading this recording of Christie’s 1952 classic than Hugh Fraser, who not only has done several audio versions of her novels but who also plays Captain Hastings in those lovely TV adaptations starring David Suchet as Hercule Poirot? Fraser uses his own British accent to narrate, then switches impressively to a perfect Belgian tinge as he lets the master detective ramble on about French food, suspicious deaths and how hard it is to handle both in the cities and villages of his adopted England. When Mrs. McGinty, a sweet-natured widow, is found bludgeoned to death, suspicion falls on James Bentley, her somewhat dodgy lodger. Bentley’s trial looks like a guaranteed guilty verdict, but a leading policeman is suspicious enough to ask for Poirot’s help. As the story begins to explode into a complex web of lies and hidden identities, novelist Ariadne Oliver (much more like the real Christie than the cute Miss Marple) joins the hunt to find the real murderer. Even fans familiar with the novel will enjoy this classic Christie audio.