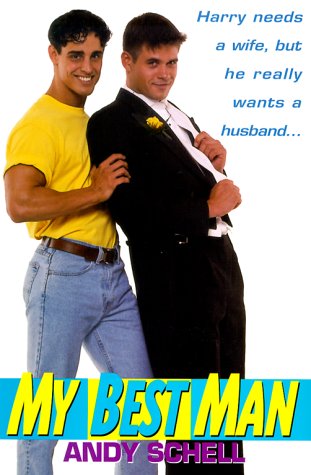 Hapless protagonist Harry Ford told his blue-blooded Kansas family he was gay when he was a teenager; his angry father changed his will to state that Harry must marry a woman by the time he's 24 or lose a multimillion-dollar inheritance. Schell's well-meaning, goofy debut novel focuses on the year--1984--that Harry, now a 23-year-old airline steward, oscillates between his gay identity and the possibility of marrying a woman. The devoted love he feels for his beautiful best friend, Amity Stone, may just be enough, he imagines, to turn him into a happy, heterosexual husband and nab him the family fortune to boot. Harry had thought he'd already foregone being rich, having turned up his nose at Ivy League colleges, law school and fancy cars, and choosing instead the freedom to be himself, date men and travel the world. And he falls hard for Argentine waiter Nicolo. But on the other hand, Harry's older brother, Winston, a closeted gay man, is licking his chops at the prospect of collecting his brother's inheritance, which annoys Harry. And then there's Amity, a Dallas wild child whose lust for wealth and luxury is equaled by her true feelings for Harry. The plot twists and turns, pitching money against emotional values and friendship against romantic love, but it and the promising premise escape the grasp of debut author Schell. The question of whether homosexuality can be chosen, changed or willed away is a hot topic, one that hopefully will be explored in fiction not so impeded by smug, unlikable characters and a self-consciously outr narrative style. This book is light fare for those who like their gay fiction glossy, glib and giggly. Agent, Alison Picard. 8-city author tour. (May)
close
Details