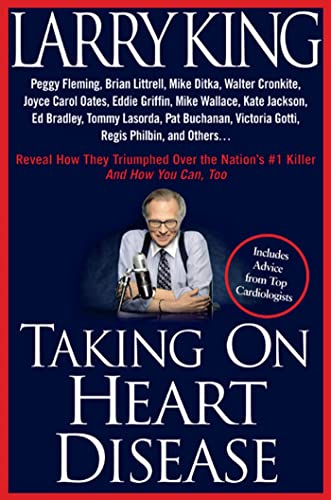 Since King underwent quintuple bypass surgery in 1987, he has worked hard to convey the message that people can fight heart disease if they are willing to change their lifestyle. That's the lesson from this collection of stories from more than a dozen celebrities in the entertainment, sports and political world. Readers will enjoy learning how Arnold Schwarzenegger, Peggy Fleming, Regis Philbin, Walter Cronkite, Joyce Carol Oates and others have waged their own battles with heart disease. Their candid contributions, segmented into such sections as Early Warning Signs, The Diagnosis, and Surviving and Thriving, reveal their rarely seen human sides. One common factor that bonds them all together is the wake-up call that heart disease has played in their lives. For example, after former Dodgers manager Tommy Lasorda had a heart attack, he decided to "face facts" and retire from his beloved post. "I said, 'Uh-uh. I want to live and see my granddaughter graduate from college.... All great things have to come to an end.' " In addition to the firsthand accounts, there are contributions from the celebrities' physicians (who are among the top cardiologists in the country), in which they spell out, in layman's terms, the medical implications of each celebrity's heart condition. The stories will provide advice, comfort and hope to readers facing their own heart problems. King deserves credit for being a catalyst in encouraging the public to come to terms with heart disease. 22 b&w photos not seen by .