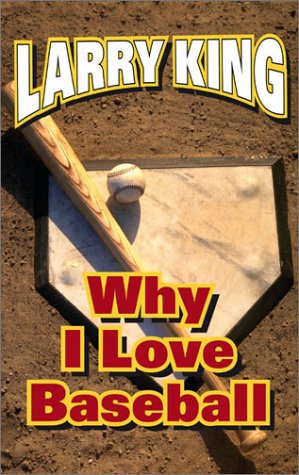 WHY I LOVE BASEBALL

There's more padding in this book than in all the chest guards worn by major league umpires and catchers, but once readers strip that away, they'll find a charming, sweet and savvy paean to the national pastime. Baseball wins most fans during childhood, and King starts with his own, when, at age 17, in 1951, he watched Bobby Thomson hit the home run that won the pennant for the Giants, against King's beloved Brooklyn Dodgers ("the saddest day in my life"). He then backtracks to even younger days, extolling the smell of popcorn, beer and hot dogs, the sight of brown dirt against green grass and the "crisp, white uniforms of the Dodgers." (King is now a Baltimore Orioles fan.) He goes on to cover the sports' eccentricities and eccentrics, the WWII years, old timers' games, Jewish players, baseball songs, stadiums, the joys of the box score, really just about anything that strikes his fancy—including, occasionally, dramatic baseball issues such as its early exclusion of nonwhite players and its current labor troubles ("millionaires arguing with billionaires"; King calls for a payroll floor as well as a tax on high payrolls). A good deal of the baseball lore King relates will be familiar to seasoned fans, and he stuffs the book with others' tales or writings; a full 23 pages are devoted to a reprint of a 1987 article of 99 reasons why baseball is superior to football. Still, what glues it all together and gives it a memorable spin is King's distinctive voice—the book reads like a fireside chat with this master conversationalist—and, above all, his passion for the sport. Most baseballs fans will adore this love letter to one of America's most enduring institutions.