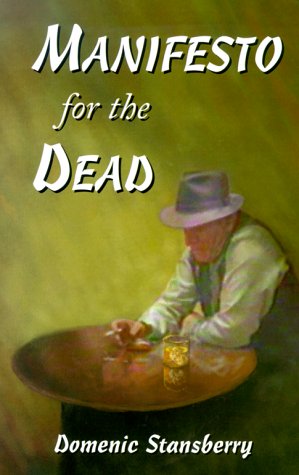 Manifesto for the Dead

The always-adventurous Stansberry, whose The Last Days of Il Duce (1998) was nominated for both an Edgar and a Hammett Award, endeavors to bring the talented, troubled noir icon Jim Thompson to life, and comes close to pulling it off. Certainly the real-life details ring true: it's 1971, and 64-year-old novelist Thompson is on the downward curve of his career, drinking too much at the famous Musso & Frank Grill on Hollywood Boulevard. After writing dozens of successful novels and two movie scripts with Stanley Kubrick, Thompson is out of money and ideas. His wife, Alberta, is disillusioned with him, and the couple is forced to move into a cheaper apartment. Then a sleazy producer called Billy Miracle and a fading star named Michele Haze sign the vulnerable Jim to write a novel based on a screenplay, scheming to rope movie mogul Jack Lombard into bankrolling both the book and the film. The tale turns seamy when a starlet is murdered, and Thompson is set up as the chief suspect. Though the book is clearly an homage to the late noir writer, Stansberry is less successful with his murder-mystery stylings than he is with his uncanny recreations of Thompson's writing. Stansberry works heroically to distract his readers with chapters of the protagonist's novel-in-progress, which channel Th0mpson's masterful use of dark, simple, powerful imagery. He also describes the hero coping with, and mirroring, the notion of plot inconsistencies: ""He'd been up against that wall himself, clutching all those ragged ends, stories within stories that almost webbed together...."" Though committed Thompson fans may quibble, there's a lot in this bluntly articulate tale to like. The book-within-a-book concept, even if it develops at the expense of the plot line, flashes with Stansberry's brand of fresh, stark prose. (Jan.)
close
Details