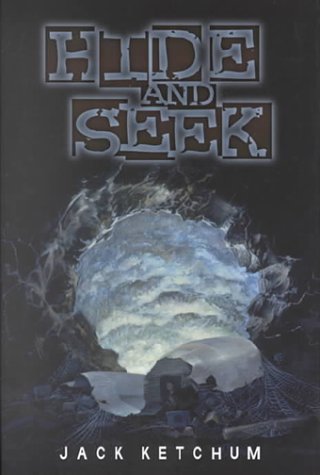 In the early 1980s, Ketchum (the pseudonym of Dallas Mayr) published in paperback as gruesome and taut a horror novel as anyone had seen: Off Season. Perhaps because of the outrage the book engendered, Ketchum's second novel, Hide and Seek, received little support from its publisher when it appeared in mass market in 1984. That's a shame, not only because Mayr's career nose-dived commercially after that (though he's still writing and publishing), but because Hide and Seek is a good novel, strong and true, scary yet uplifting in the classic horror manner. Set during summer in the Maine coastal town of Dead River, the book divides into two parts. In the first, the narrator, local young man Dan, meets visiting college kids Casey, Kim and Steven; engages in some drinking and daring with them; falls for beautiful, wild Casey (they have sex in a graveyard) and learns what impels her to take risks: years ago, she was sexually abused by her father--abuse that led to the death of her younger brother. The book's second part provides the payoff to that meandering but tantalizing setup. In it, the quartet agrees to play hide-and-seek in a local haunted house. The game soon turns frightening, then deadly, as the four encounter the house's horrid inhabitants, not all human--a challenge that prompts Dan and others to grow up quickly. As in Off Season, the action is ultraviolent and shocking, but the point here, as there, isn't the grue but the spirit of those who must deal with it. Here, too, Ketchum writes with economy and power, in sentences that tighten like noose wire. Anyone who enjoys fine, hard horror will appreciate this novel, at last available in hardcover--here, in a signed limited edition likely to sell out quickly. (Oct.)
close
Details