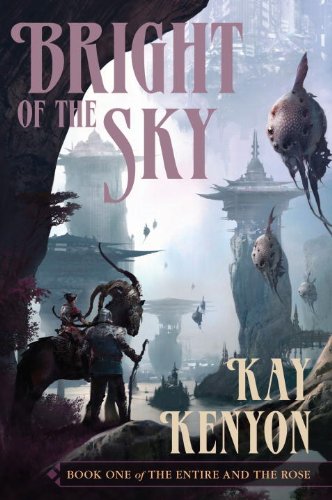 Bright of the Sky: Book One of the Entire and the Rose

At the start of this riveting launch of a new far-future SF series from Kenyon ( ), a disastrous mishap during interstellar space travel catapults pilot Titus Quinn with his wife, Johanna Arlis, and nine-year-old daughter, Sydney, into a parallel universe called the Entire. Titus makes it back to this dimension, his hair turned white, his memory gone, his family presumed dead and his reputation ruined with the corporation that employed him. The corporation (in search of radical space travel methods) sends Titus (in search of Johanna and Sydney) back through the space-time warp. There, he gradually, painfully regains knowledge of its rulers, the cruel, alien Tarig; its subordinate, Chinese-inspired humanoid population, the Chalin; and his daughter's enslavement. Titus's transformative odyssey to reclaim Sydney reveals a Tarig plan whose ramifications will be felt far beyond his immediate family. Kenyon's deft prose, high-stakes suspense and skilled, thorough world building will have readers anxious for the next installment.