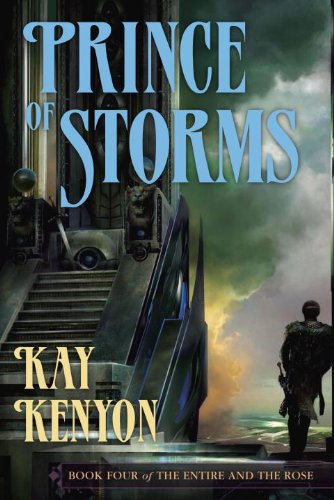 Prince of Storms: Book Four of the Entire and the Rose

Kenyon’s saga of ambitious power grabs, black-hearted betrayals, and star-crossed romance draws to a generally satisfying conclusion in this challenging novel (after 2009’s ). Earth man Titus Quinn unhappily rules the universe known as the Entire, parallel to Earth’s universe, the Rose. Quinn had promised to turn over the throne to his estranged daughter, Sen Ni, but her alliance with powerful psychic Geng De has Quinn determined to hold out as long as necessary to guarantee the safety of Earth and the Rose. First he must safely remove the Tariq, the high-tech lords who nearly destroyed Earth once before, and broker an alliance with the Jinda ceb, an advanced race whose technology could save Earth. New readers will struggle with the complexities, but the broad themes, exotic setting, and advanced technology are charmingly reminiscent of golden age SF.