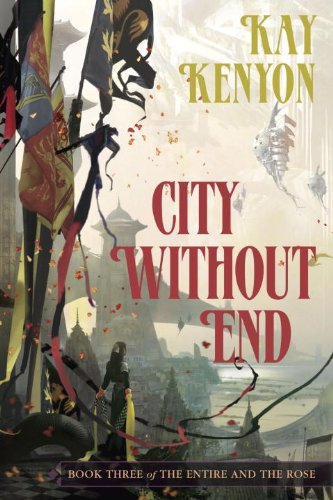 Kenyon concludes the Entire and the Rose space opera saga (after 2008’s ) with a pleasantly old-fashioned final race to save Earth’s universe, the Rose, from being consumed by the alien Tarig to power the Entire, a parallel universe. Earth agent Titus Quinn has temporarily stalled the Tarig plot. The Tarig attempt to enlist Quinn’s Entire-born daughter, Sydney, whom he abandoned years ago, but Sydney has revenge plans of her own. Meanwhile, Helice Maki, Quinn’s former fellow agent, schemes to build a powerful place for herself in the Entire, and the humans behind Project Renaissance plan to bring 2,000 of Earth’s best and brightest to the Entire before destroying the Rose. The plot is intricate, if not always coherent, with heroes and villains eventually sorted out just in time for the relatively predictable finale.