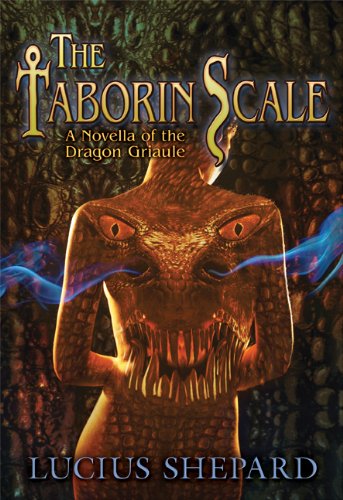 Master literary fantasist Shepard ( ) makes a grim return to the world of his classic surrealist short story “The Man Who Painted the Dragon Griaule.” Philandering antiquities dealer George Taborin travels to the city of Teocinte, which rests in the very shadow of Griaule, an immobile dragon the size of a mountain. There he discovers a tiny dragon scale in a jar of old coins. When he rubs the scale it transports him to a hot, unpleasant alternate reality where a smaller but equally malevolent version of the dragon holds him and others captive for unknown reasons. George saves a teenage girl from sexual slavery, comes to terms with his own nature, and eventually bears witness to terrible destruction. Beautifully written and intensely ironic, this tale will strongly appeal to connoisseurs of sophisticated adult fantasy.