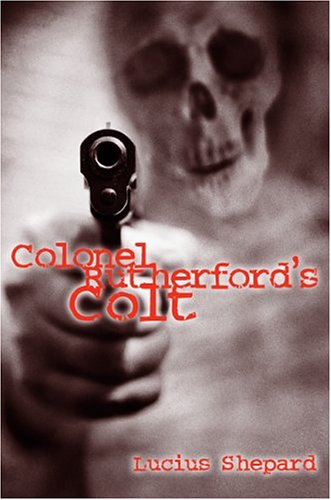 When an itinerant gun dealer wields a prized Colt .45 revolver, fiction bleeds into reality in this offbeat bit of Pacific Northwest noir from the versatile Shepard (). Business partners Jimmy Roy Guy and Rita Whitelaw, who specialize in weapons with unique histories, hit pay dirt at a Washington gun show when the widow of a slain white supremacist allows them to sell the weapon her husband was carrying when he died. Her only stipulation is that the gun not fall into the hands of Raymond Borchard, her husband's disciple, who has fixated on it as a talisman that could catalyze his racist agenda. The real loose cannon, though, is Jimmy himself. A burn-out with a vivid imagination, he delights in spinning elaborate stories around the weapons he sells. The tale this gun inspires—one of infidelity, dishonor and revenge set in Cuba in the early 20th century—so overwhelms him that he begins acting it out with what proves to be deadly accuracy. Is Jimmy a closet psychopath, or has he channeled a secret history for the gun that resonates eerily with present events? The question is moot, since Shepard shows all the other characters in some way living with delusions about their identities and ambitions no less fantastic than Jimmy's tale. Though not as sharply focused as Shepard's more speculative fiction, this short novel showcases his gift for psychologically penetrating character study and supports a historical story-within-the-story as evocative as anything he has written.