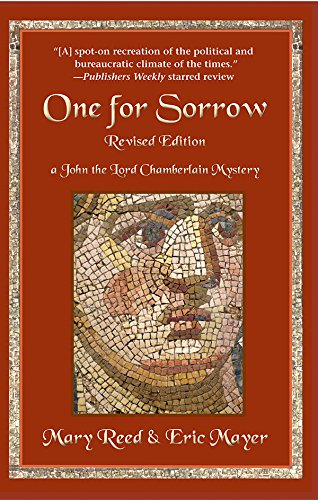 Painting an enticing picture of sixth-century Byzantium, Reed and Mayer ably evoke court intrigue and the conflict of religious beliefs in the Christian capital of Constantinople. The sleuth is John the Eunuch, lord chamberlain to Emperor Justinian. When the body of Leukos, the Keeper of the Plate, is found in a filthy alley behind a house of ill repute, the emperor asks John to investigate. John obliges because, as Leukos's friend, he can't imagine what a devout Christian such as Leukos was doing in a whorehouse or who would have wanted to murder the kindly man. The obvious suspect is an old, itinerant soothsayer. But again, John can't fathom why his friend would be courting pagan practices such as having his fortune told. Oddly, after John talks to him, the old man vanishes, rumored to have drowned in the sea while trying to flee the city. Another suspect is a knight from King Arthur's court on a quest for the Holy Grail. After the soothsayer disappears, however, Emperor Justinian seems suddenly cool to John's efforts to pursue evidence against other possible culprits. John's investigations are further hampered by the sudden appearance of his ex-wife and a daughter he did not know he had: years earlier, John had been captured and sold into slavery, forever separated from his wife and emasculated by barbarians. Their prose suffers from affected archaisms, but the authors gracefully intertwine John's personal history and the traffic in holy artifacts with the early history of Christianity. (Nov.)
close
Details