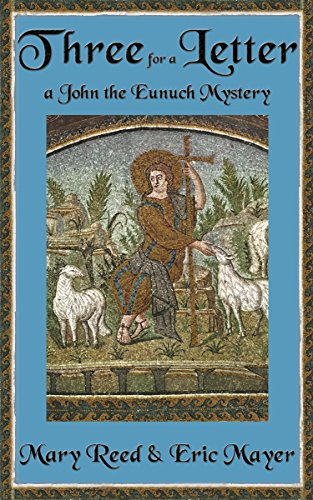 THREE FOR A LETTER

John, Lord Chamberlain to the Emperor Justinian, continues his sixth-century A.D. adventures in this third worthy installment (following and ), in which nimble wits are required not to keep one's job but to keep one's head. John's position is particularly fragile since Justinian's support is notoriously fickle and his consort, the beautiful and dangerous Theodora, despises John. When an entertainment devised for Theodora results in the death of a young royal hostage and the disappearance of Barnabas, the empress's favorite dwarf, John is once again charged with the difficult and delicate task of ferreting out the truth. He is also charged with protecting the life of the remaining hostage, eight-year-old Sunilda, a task made even more daunting by the child's recklessness. Set not in Constantinople but on the nearby estate of a wealthy noble, the authors' latest mystery combines a finely nuanced historical background with a plot of great subtlety. The details of daily life, from food and food preparation to the care and writing of manuscripts, enhance the action. And the ongoing struggle between Christianity (Justinian's state religion) and the pagan rites that play a central role in the plot is particularly well drawn. If there's any flaw it's that John, while a sympathetic protagonist, is too self-contained to really arouse the reader's passions. Nonetheless, those who appreciate strong historical backgrounds and solid plotting will get their money's worth. The Byzantine mosaic art on the jacket is a real plus.