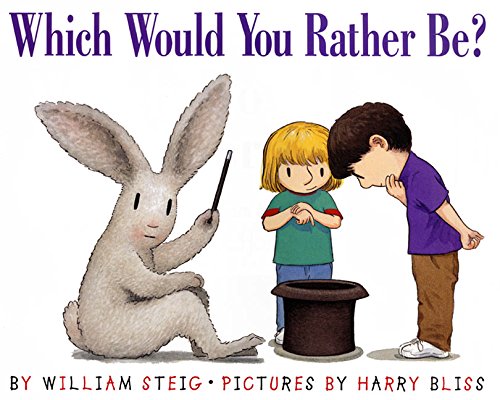 WHICH WOULD YOU RATHER BE?

In this wonderfully economical exercise, a shrewd question-and-answer format harmonizes with fine-tuned images. On almost every page, a big gray rabbit faces two children across an upside-down top hat. The rabbit is matter-of-fact, not cute. Voice bubbles contain its deadpan questions ("Which would you rather be?/ A stick/ or a stone?/ …/ A cat/ or a dog?"), as each possibility emerges from the hat and the children react with a word or a gesture. When the dog chases the cat, the girl shoots an irritated look at her laughing friend, who shouts, "A dog!" As a hockey player crawls from the hat ("A boy"), the displeased girl crosses her arms. Her scowl turns to a competitive smirk when the next question ("or a girl?") suggests the skater could be female. After "an elephant" fills the page, only the boy's departing foot can be seen as the children retreat; when "a crocodile" lunges out, a well-placed voice bubble and the croc's gaze indicate that all three players have exited stage right. Bliss (illus. of ) composes his wry illustrations on a blank white ground in the fluid style of Charles M. Schulz or Crockett Johnson, and he loads his characters' every movement with subtle meaning. As in his , Steig provides many more options than hard-and-fast rules, leaving the continuation of this game to the bemused audience. Ages 3-7.