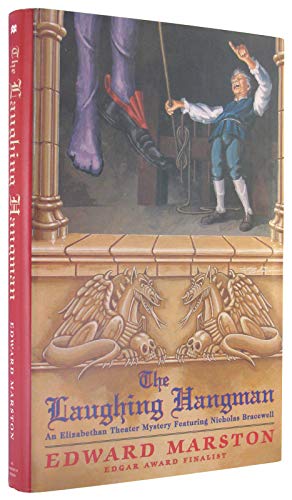 The coarse and treacherous world of Elizabethan theater is brought vividly to life as Lord Westfield's men return for an eighth outing (after The Roaring Boy, 1995), in which jealousy, murder and accusations of blasphemy descend upon the troupe. The players are about to perform the latest work of Jonas Applegarth, a controversial, foul-tongued playwright whose ego is nearly as fat as he is. But amidst the triumph of the performance, tragedy strikes: the elderly choirmaster of a children's acting troupe (and rival of Westfield's men) is found hanged above his own stage. When stage manager Nicholas Bracewell discovers the body, he hears the distinctive sniggering of the murderer, nicknamed the Laughing Hangman, echoing in the theater. With little to go on, Bracewell investigates while providing bodyguards for the universally unpopular Applegarth and sorting out his own relations with his former love, Anne Hendrik. A second murder at the Queen's Head, home of Bracewell's troupe, leads to a riveting finale. Fans of Bracewell and company will relish this return to the company of Lawrence Firethorn, lead actor and ladies' man, and unlucky playwright Edmund Hoode, who may at last have found love. Marston's wit and vivid evocation of Elizabethan London's sights and smells provide a delightfully ribald backdrop for this clever series. (Aug.)
close
Details