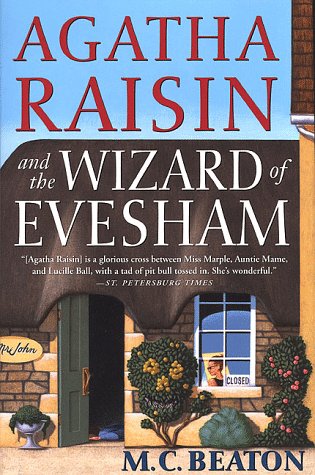 Agatha Raisin and the Wizard of Evesham

It doesn't take long for Agatha Raisin, the touchy heroine of the series of catty English cozies by the prolific Beaton (see Death of an Addict, above), to turn a bad hair day into a mini-crime wave. In an attempt to get rid of the gray, Agatha accidentally colors her hair purple. Soon she finds herself in the capable hands of Mr. John, a hairdresser with a devoted following in nearby Evesham. Tinting and styling aren't his only tricks--with his deep blue eyes and sympathetic nature, he coaxes all sorts of confidences out of his clients. Even the tough Agatha half falls under his spell, although she has an excuse since she's heartsick over neighbor James Lacey, who's left her alone while he goes on holiday. But when several of Agatha's neighbors appear terrified of Mr. John, her fellow amateur sleuth Sir Charles suggests--almost hopefully, in his summer doldrums--that the hairdresser might be a blackmailer. Agatha agrees to set herself up to catch Mr. John in the act, but the suspect dies of poisoning before he can take the bait. Fearing she might be on a killer's shortlist herself, Agatha sets out to find the murderer. Beaton masterfully describes the annoyances and ego deflations suffered by the middle-aged Agatha, as well as the summertime blues caused by unusually hot weather. But the plot, which itself seems to suffer from heat exhaustion, isn't terribly plausible, and could have used a dose of the wide-eyed Detective Sergeant Bill Wong, who barely shows up here. Agatha's fans will take her any way they can get her, but they won't leave this one feeling fully satisfied. (Apr.)
close
Details