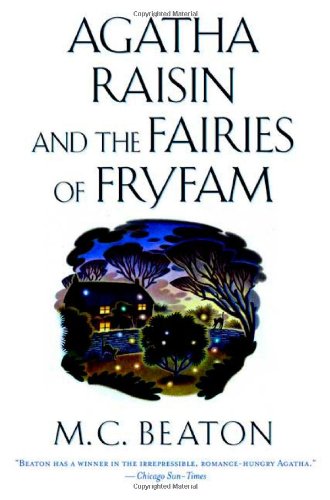 When a fortune-teller tells Agatha Raisin that her destiny lies in Norfolk, the puckish 50-ish heroine of nine previous adventures in this witty series doesn't think twice about renting a cottage sight unseen in a county she's never visited. Of course, Agatha has been spurned by the love of her life, her Cotswolds neighbor James Lacey, which has a lot to do with her removing herself and her two cats, Hodge and Boswell, to the village of Fryfam. There she meets the members of the Fryfam's Women's Group, to whom she explains her presence by saying she's writing a crime novel, Death at the Manor--an unfortunate fib as the village squire, Tolly Trumpington-James, is soon murdered at his manor house. Aided by suave friend Sir Charles Fraith, Agatha sets about prying into the lives of the locals to discover who wanted the squire dead. Peculiar lights at the bottom of her garden (the work of fairies?), the theft of a heavily insured George Stubbs painting, the brief disappearance of her two cats and a second murder, that of Tolly's gamekeeper, may disturb but not shake Agatha from her quest. In the end Charles uses his charm to elicit an important clue from the ravishing barmaid at the pub popular with the Fryfam menfolk. That the social comedy largely overshadows the mystery and its solution won't bother Beaton fans, who will be far more concerned whether Agatha falls for Charles herself or wins back the feckless James in this highly amusing cozy. (June)
close
Details