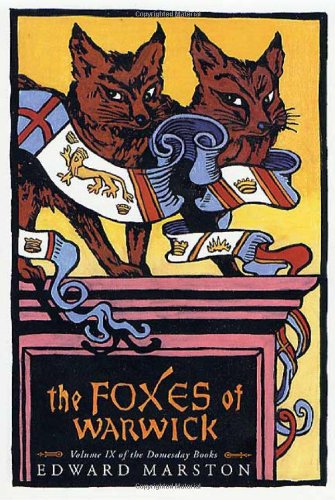 THE FOXES OF WARWICK

"View halloo!" In this lively, fast-moving tale of medieval England (after 2001's ), Henry Beaumont's hounds have caught the scent and cornered the fox. But when Beaumont's guests canter up for the kill, they find a "fox" of another stripe, for lying on his back, crushed to death, is Martin Reynard, Beaumont's former reeve, who's recently joined the household of Thorkell of Warwick. Summoned to Warwick to settle a land dispute, king's commissioners Gervase Bret and Ralph Delchard find themselves caught up in the murder investigation. The blacksmith, Boio, a gentle, slow-witted giant in the service of Thorkell, has been accused of the murder and imprisoned, though he protests his innocence. Gervase and Ralph believe him and determine to prove it. The plot is furthered by a dancing bear and his dwarf keeper, by an itinerant thaumaturgist and by the touching story of a deformed woman who loves the blacksmith. Marston's familiarity with the folk and landscape of 11th-century England gives his tale the verisimilitude of history and make Ralph and Gervase, two of William the Conqueror's "Domesday" (tax record) surveyors, thoroughly credible. Marston (nom de plume of Keith Miles) has written plays, radio dramas and television series (as well as more than 40 books), and the crisp dialogue is a result. Dispensing with "he said, she said," his characters converse like real people, and, like real people, engage our interest and sympathy.