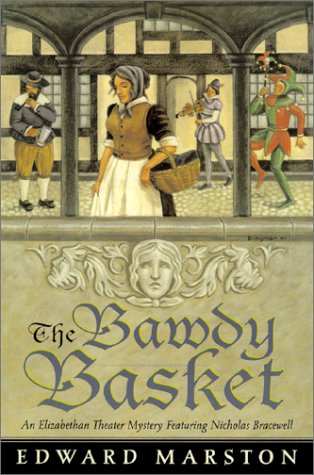 Edgar nominee Marston (one of several pseudonyms of British author Keith Miles) offers his 12th engaging, leisurely Elizabethan theater mystery (, etc.) featuring Nicholas Bracewell and Westfield's Men, a tightly knit acting company. A fine actor, Frank Quilter puts in a poor performance because his father has been convicted of murder. Quilter persuades Bracewell, the company's stage manager, that his father is innocent and that witnesses have perjured themselves. When his father is hanged, the company wants to expel Quilter, but Bracewell persuades the others merely to suspend him. Quilter and Bracewell investigate, starting with the witnesses who helped send the elder Quilter to the gallows. At the annual St. Bartholomew's Fair they find the eponymous bawdy basket, a female peddler of notions and favors, who contravenes the perjurers' testimony just before she's murdered. The company is damaged even further when its playwright is approached and conquered by a comely, wealthy widow with whom he wants to retire to the country and write sonnets in her praise. A final blow to the players comes when a usurer demands payment of the many debts of Lord Westfield, the company's patron, who, like most London gentlemen, extravagantly lives on borrowed money. Marston neatly resolves all the difficulties and ties up the plot strings while conveying through the judicious use of period language the atmosphere of 16th-century England.