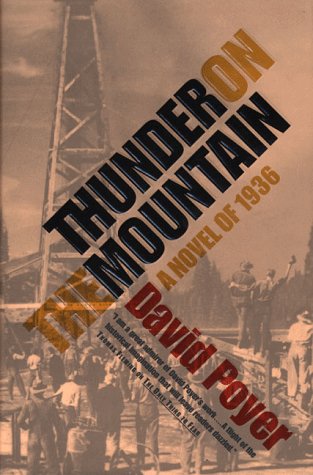 Thunder on the Mountain

Veteran writer Poyer triumphs in a powerful tale of an underdog hero fighting against an invincible robber baron. In strong, supple prose that propels a tension-filled narrative, he captures the revolutionary spirit behind the struggle against near-slave-labor conditions for workers--many of them immigrants--in a giant oil consortium in western Pennsylvania during the bitter winter of 1936. Bill Halvorsen is a promising boxer hired as a driller by Dan Thunner, the owner of Thunder Oil Company and a local boxing league. Bill is courting Jennie, a Slovakian Catholic immigrant, and trying to prove to her family that he's husband material with a steady job, when an explosion at a Thunder refinery exposes the lack of safety regulations that lead to the gruesome deaths of five men, including his fiancee's young brother. Using stark detail, Poyer depicts the conditions of employees with no security or safety protection, subject to wage cuts to subsistence level pay when profits were threatened. Halvorsen sparks a brief walkout, catching the attention of the CIO, and Doris Golden, a strike organizer with secret Communist ties, is sent to unionize the oil industry, starting with Thunder. The movement gains momentum until a professional strike buster, Pearl Deatherage, convinces Thunner that brute force and political briberies will smash the workers' revolt. The ruthless Deatherage pushes Thunner further into the scab market, leading to murders that are blamed on the strikers. Then Bill comes up with a desperate plan. The terrifying denouement further illuminates the complexities of the workers' plight, yet there's not one scene of gratuitous violence in a novel full of violent death. Poyer's (As the Wolf Loves Winter) pitch-perfect dialogue and explosive imagery capture both sides of the bloody battle that gave birth to the unions. This is a stunning period tale in which the oft-forgotten essence of the American dream is visible in every chapter. (Mar.)
close
Details